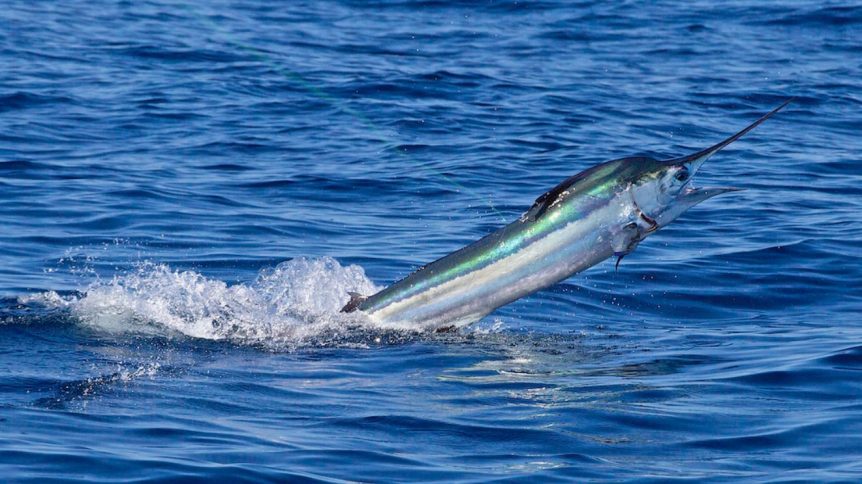 Here’s the story behind one of many of Pat Ford’s IGFA fly-fishing records for white marlin, as told by Release Boatworks founder Jim Turner.

Yesterday my friends Herb Rosell, Chris Sheeder and I were able to spend the day peacock bass fishing on the “world famous” E-Lake in Miami. We were hosted by our friend Pat Ford. He graciously took us out in his boat essentially acting as our guide. The lake and the day did not disappoint. We all got our E-Lake Slams – Peacock Bass, Largemouth Bass and Midas Cichlid. Plenty of fish were caught and old fishing stories were shared. It was for me what fishing is all about – spending time with friends, escaping (for a while) everyday life and enjoying nature’s bounty.

I was reminded of a story Pat had told me awhile back when we were fishing together on the Captain Hook with Ron Hamlin. Now, most people know Pat as one of the great outdoor photographers, his photos have been in every magazine and he has written books and articles for years, but Pat is also a world class angler with several IGFA records. Years ago (in 1984 to be exact) he was fishing Venezuela with the goal of setting the 8lb tippet white marlin record. Several days had gone by with no success.

Finding an aggressive fish in the right size range was no easy task – as expected. Pat was sitting up on the flybridge swapping stories with the man behind the helm – Ron Hamlin. It is un-clear if there was rum involved at this point, but finally Ronnie called out “WHITE MARLIN”.

He then turned to an excited Pat Ford and said “Pat, I want you to be careful going down the ladder. It’s slippery and I don’t want you to fall and break your leg. But if you do,” he continued, “there’s a knife on top of the drink box. Just grab it and slit your f***ing throat, because that’s a world record behind the boat.” Needless to say, Pat, who was already feeling the pressure, immediately laughed and carefully went down the ladder to once again go down in the IGFA record book with a 73 lb white marlin on 8 lb tippet!

Researched and published by Lacey Hagler.