The bluefin tuna, more than any other species, can be credited with pushing the development of today’s sportfishing boat. Considered the epitome of big game fishing, giant tuna are responsible for many of the sport’s early innovations; the aluminum tower, transom door, aluminum outriggers and modern fighting chair were all developed to chase giant tuna in the gin-clear waters off the Bahamas. 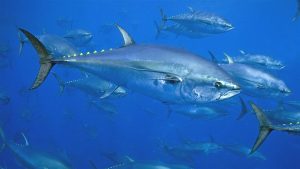 In the early years, builders such as Rybovich, Merritt, Whiticar, Jim Smith, Forest Johnson and Bertram began building the boats that soon became the classics of big game fishing. These boats offered the range, maneuverability and speed necessary to take giant tuna in the Florida Straits. Over the years, the once reliable month-long run of giant tuna had begun to fade to a week of frenzied action off Bimini and Cat Cay, and many days fishermen ran 100 miles at speed looking for fish.

Soon, boats became faster and bigger, and the “ideal” boat grew from the mid-30-foot range to 45, 54 and then to 72 feet. Sportfishing hotspots were established in places like Isla Mujeres, Mexico, and destinations in the Pacific including Costa Rica, Panama and Guatemala. Traveling fishermen now required something more than just a fast, nimble fishing platform. They needed comfortable, seaworthy boats with on-board accommodations for themselves and crew to travel long distances to fish.

In the wake of this progress, the boats that were once perceived as the perfect fishing boats were abandoned.