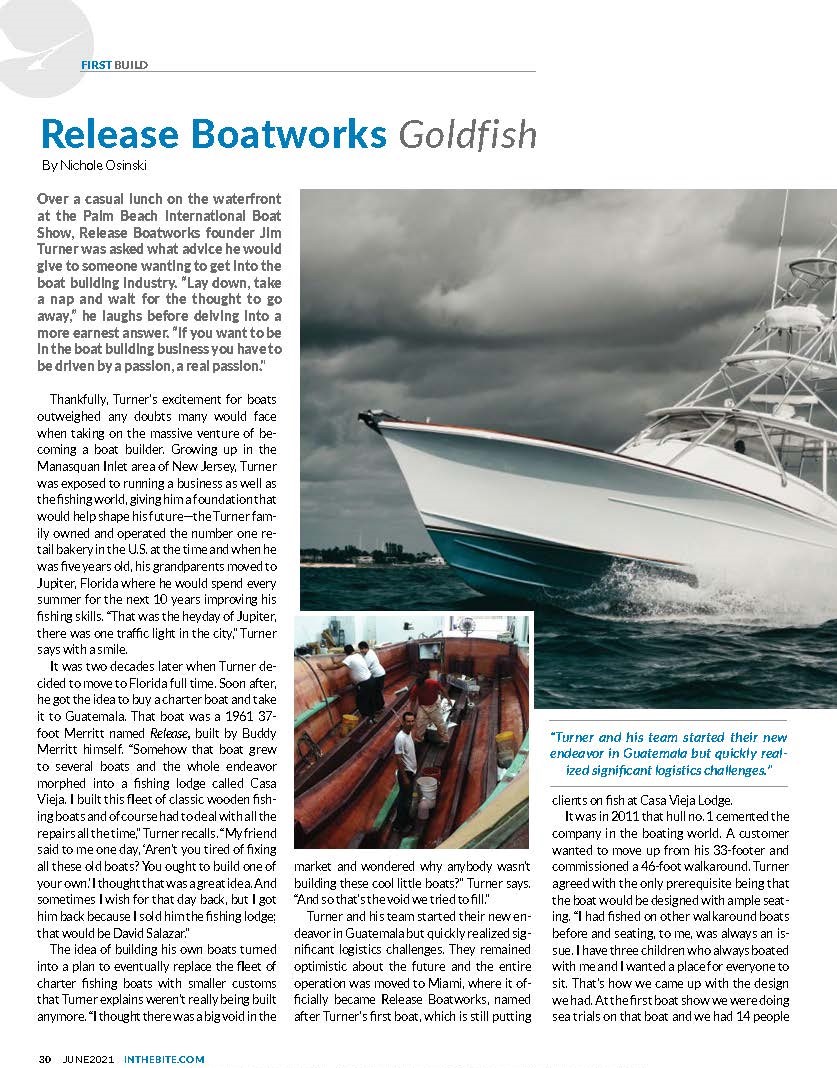 Over a casual lunch on the waterfront at the Palm Beach International Boat Show, Release Boatworks founder Jim Turner was asked what advice he would give to someone wanting to get into the boat building industry. “Lay down, take a nap and wait for the thought to go away,” he laughs before delving into a more earnest answer. “If you want to be in the boat building business you have to be driven by a passion, a real passion.”

Thankfully, Turner’s excitement for boats outweighed any doubts many would face when taking on the massive venture of becoming a boat builder. Growing up in the Manasquan Inlet area of New Jersey, Turner was exposed to running a business as well as the fishing world, giving him a foundation that would help shape his future—the Turner family owned and operated the number one retail bakery in the U.S. at the time and when he was five years old, his grandparents moved to Jupiter, Florida where he would spend every summer for the next 10 years improving his
fishing skills. “That was the heyday of Jupiter, there was one traffic light in the city,” Turner says with a smile.

It was two decades later when Turner decided to move to Florida full time. Soon after, he got the idea to buy a charter boat and take it to Guatemala. That boat was a 1961 37-foot Merritt named Release, built by Buddy Merritt himself. “Somehow that boat grew to several boats and the whole endeavor morphed into a fishing lodge called Casa Vieja. I built this fleet of classic wooden fishing boats and of course had to deal with all the repairs all the time,” Turner recalls.“ My friend said to me one day, ‘Aren’t you tired of fixing all these old boats? You ought to build one of your own.’ I thought that was a great idea. And sometimes I wish for that day back, but I got him back because I sold him the fishing lodge; that would be David Salazar.”

The idea of building his own boats turned into a plan to eventually replace the fleet of charter fishing boats with smaller customs that Turner explains weren’t really being built anymore. “I thought there was a big void in the market and wondered why anybody wasn’t building these cool little boats?” Turner says. “And so that’s the void we tried to fill.”

Turner and his team started their new endeavor in Guatemala but quickly realized significant logistics challenges. They remained optimistic about the future and the entire operation was moved to Miami, where it officially became Release Boatworks, named after Turner’s first boat, which is still putting clients on fish at Casa Vieja Lodge.

It was in 2011 that hull no. 1 cemented the company in the boating world. A customer wanted to move up from his 33-footer and commissioned a 46-foot walkaround. Turner agreed with the only prerequisite being that the boat would be designed with ample seating. “I had fished on other walkaround boats before and seating, to me, was always an issue. I have three children who always boated with me and I wanted a place for everyone to sit. That’s how we came up with the design we had. At the first boat show we were doing sea trials on that boat and we had 14 people on board, and everybody was sitting down.”

This was also at the time pod drives were being utilized, a feature that Turner decided to incorporate. He also wanted the boat to be more than just a sportfisher. “Before we built that 46 the walkaround was always known as the hardcore fishing boat. We kind of made it more family friendly without forgetting about the things that were important to me and similar to our boats in Guatemala. We had to have a real clean wake when we were trolling. The boat had to be super maneuverable and efficient, and I think we checked all the boxes on that boat and everything we’ve
done since then.”

For the build process itself, Turner says he was fortunate to have a good team. With this he had contacts within the boat building industry who he was able to pull advice from, including top builders like Michael Rybovich and Roy Merritt. Echoing a similar sentiment of other builders, Turner is quick to point out that most are open and honest when it comes to sharing details of a boat’s production equaling a camaraderie among those who dare to take on a new project. Turner uses the term Florida boat when discussing what direction he wanted to go with hull no. 1. Rybovich and Merritt were who he considered Florida’s master builders, with boats defined by him as having a timeless look and style that he wanted to emulate with his first build. This included features such as a spray rail incorporated into the chine of the boat, making it not only an aesthetic feature but also a functional part of the hull. Turner also focused on minimal bow flare and a guard rail on the outside of the tumblehome. Additionally, low gunnels for easy releasing of billfish boatside, the perfect camber to drain water to scuppers quickly, and a massive tackle center in the cockpit
would make this one of the most highly desirable and anticipated boats on the market.

Of course, there was the mold for the hull itself to consider. “I came up in a production background and in my previous businesses production is always about being consistent, so in my mind building a boat from a mold gives me complete control of everything that’s going into that product and I can have 100 percent consistency. It’s all about the consistency and you can only achieve that by using molds and then obviously all the expenses go into developing that first mold. You’re able to offset that by building more boats, so it’s a more economical way to build once you’re into that process.”

Another big factor that soon became apparent was where the boats were being
built. “Every mold you have requires a lot of space so that’s one of the reasons our facility is in New Jersey. We have a 13-acre facility now, but when I started in Miami, I had a 60,000-square-foot facility and I had only 12 parking spaces, and that was it. Everything had to be kept inside, so even though it was a big space, when you’re taking up half that with molds, it’s not that much. Your production is limited by how soon you can get a boat or a hull out of the mold and move on to the next boat. Now we have that complete freedom in our new facility.”

While these days the build of a Release Boatworks 46 can take roughly nine to ten months to complete, hull no. 1 was the exception. The hullwas laid on November 15, 2011, and by February15, 2012,the boat was at the Miami Boat Show delivering smiles and sea trials. “It’s pretty amazing and I never want to do that again,” Turner says. “We worked weekends, Christmas Eve, Christmas Day and New Year’s Eve to get that boat to the show.”

Hull no. 1, christened Goldfish, due to the new owner’s precious metal smelting business, was a hit on the water. “The first sea trial was definitely like the birth of a child, but it was pretty cool. I had the engineers from Cummins on the boat and one of them says, ‘Ok, do a hard over turn at full speed.’ And I’m like alright,” Turner says with a laugh remembering the moment. “He’s shouting at me ‘Do it, do it!’ and we made the turn and the boat just handled
far better than we’d ever hoped for, so really it did everything that we intended it to do and more.”

Since then, Release Boatworks has not only gone through a big move but has acquired Gamefisherman Boats while continuing to build in the niche 30-to 50-foot range, with the addition of their most recent 55-foot walkaround flybridge announced this April. Hull no. 1 recently came full circle with the newest Release Boatworks being another 46 walkaround called Showtime that was delivered during the Palm Beach International Boat Show. Goldfish, now rechristened Charlie, is on her second owner and can be seen fishing out of Singer Island most days.

Thinking back on hull no. 1, Turner gives a simple yet poignant answer as to why he went forward with that first pivotal build. “The fun part of building a boat is the entire process—everything from the initial vision and engineering behind what the boat is built to accomplish, to ‘How do I also make this boat a work of art?’ Each boat should be an expression of who you are.”