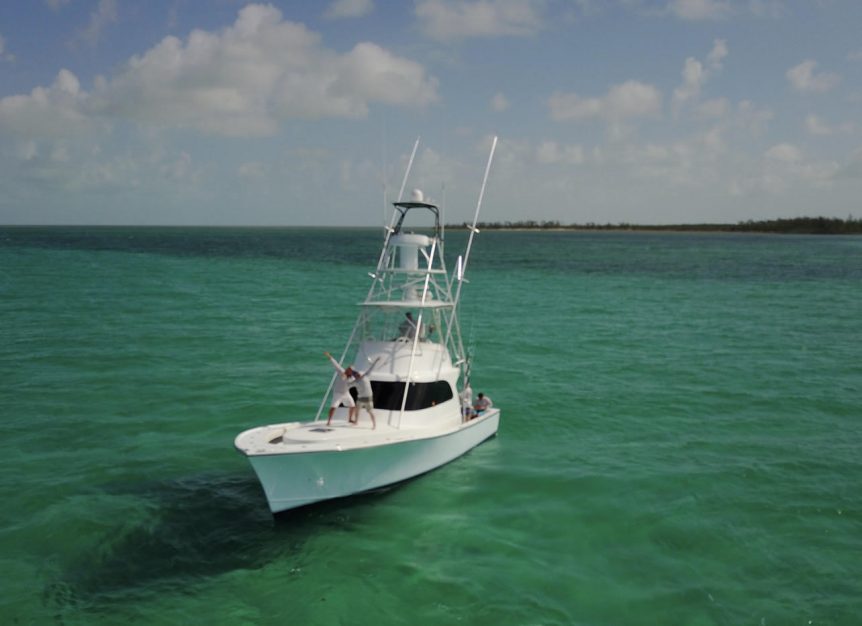 With the recent announcement of the 55’ Release Boatworks Walkaround Flybridge build plans, we’d like to further recognize the history behind our much anticipated “Swiss Army Knife of Sportfishing”.

As with any iconic build, there is a back story and years of hard work by trailblazers and visionaries. Here are the stories behind the men who brought the first two Walkaround Flybridges to life, PELAGIC and MISS BRITT II.

The conception of the first Walkaround Flybridge began in July of 2002 with Captain Randy Towe, a Florida native and experienced charter fishing captain in Islamorada. While Towe appreciated the traditional look of a sportfisherman, he wanted the fishability of an open fisherman. With nothing but a vision in his head of a Walkaround boat with a Flybridge on top, he had Claude Torres build a 43’ hull with a fuel tank and a couple of bulkheads, and towed it from Key West to his home in Islamorada.

“So here we are, a couple of fish heads, with a 43’ hull in my backyard, and we’re going to build a boat – no plans, no blueprints, nothing but this vision in my head,” Towe says about him and his mate at the time, Robert Morrison (aka “Skinny”), who helped him draw a rough sketch on a yellow pad over a 12-pack of Budweiser.

Towe, Skinny, and carpenter and friend Tom Yarborough, spent 13 months day in and day out making each part from core and fiberglass with no advantage of molds or wood.

While building a one-off boat is a complicated feat for a first-timer, Towe also fielded advice from experience builders. “Billy Knowles was very instrumental,” Towe said. “I met with him several times going over things, and Roy Merritt was a personal friend that really helped me out with a lot of problems that I had to figure out in design and making something so it would work. We really had to build things to see if it would work, and everything we built would offset something else down the road so you had to make it all fit, and that’s what we did.”

Since Towe’s 43’ PELAGIC was splashed in 2003, she’s fished the Bahamas, sailfish tournaments up and down the East Coast, and the Florida Keys, where Towe has run charters for 30 years. Not to mention, this boat has won swordfish and sailfish tournaments, including Jamie Bunn’s Sailfish Challenge taking home a $150,000 payday. She has turned so many heads and impressed captains with her fishability, but no builder has taken on the challenge to bring this model into production with no blueprints available – until the Release Boatworks 55’ twenty years later. Bought by Towe’s good friend Bernard Paul-Hus and renamed SKIPJAC, he says the boat couldn’t have gone to a better person.

We’re excited to welcome Bernard Paul-Hus to the Release Boatworks family as well, as he has contracted us to build him a 55’ Walkaround Flybridge, Hull #3.

“You’re going to change how people boat,” Towe emphasizes to Release Boatworks. “People stay in the bow of that boat. They don’t stay in the cockpit and they don’t stay inside. They circumnavigate to the bow and they hang out there all day long, but you don’t see that on other sportfish because they’re not going to do that on a boat they have to straddle to get to the bow- for comfort and for safety reasons. There are just so many things that make sense with this design. I couldn’t be happier that you guys are doing it and I feel really honored that you’re including me. The Release Boatworks boats are so classy looking. Just the whole look and profile is so ‘custom classic’ looking that when they get this thing finished, it’s going to be such a show piece, and the functionality of it will be so much different and better than anything else out there.”

Ray Rosher is another highly influential person to the Walkaround Flybridge design, who worked for over two years with Jim Bacle to complete 43’ Bacle MISS BRITT II in the Fall of 2006. His inspiration was sparked while running a boat for Nick Smith, 37’ Billy Knowles OLD RELIABLE.

“Nick was a really brilliant boat designer and he is one of the best fisherman I have ever fished with,” Explains Rosher. “He inspired a lot of what was used in the design of the 43’ Walkaround. Most of my desire to build the 43’ came from running Nick’s boat and seeing how efficient that boat was at catching fish due to the functionality of the design.”

While MISS BRITT II trolls dead baits occasionally, live baiting on kites is her primary use in South Florida waters. Rosher and his crew fish 365 days a year in Miami, and the boat has been running most of those days on a single C-18 CAT since 2006.

“It was worth the couple of years it took to build a boat because I get to enjoy the gift that Nick Smith and Jim Bacle gave to me everyday. The walkaround is very conducive to [kite fishing] because we can fish with baits downwind of the boat and drift baits flat on the upwind side of the boat, plus bottom rods.” Rosher elaborates, “It just allows for great coverage. Basically, a big footprint on the water makes the boat much more effective. When you hook up you can take that fish and put it on the bow by maneuvering the boat to keep that fish away from other baits, and most importantly catch it quickly and comfortably because you’re going forward instead of backwards.”

The amount of gratitude Ray Rosher has about those who have helped him build his dream boat is notable. “My hats off to Jim Bacle and Nick Smith for all of the support and direction they gave me. It really has changed my life and it’s such a great boat to charter out of. I’m thankful to have lots of great memories with lots of friends that come charter us. It’s pretty amazing what a boat can do with the right design in the right area.”

Rosher and Release Boatworks Founder, Jim Turner, have also spent a bit of time together at their original home port in Coconut Grove. “[Jim and I] had a lot of time to discuss the benefit of the walkaround. He’s carried it on with his experience in building a great boat as well. I’ve always respected Jim too. He’s a really good boat builder who is trying to build something special.”

For more information about our upcoming 55′ Walkaround Flybridge, CLICK HERE.