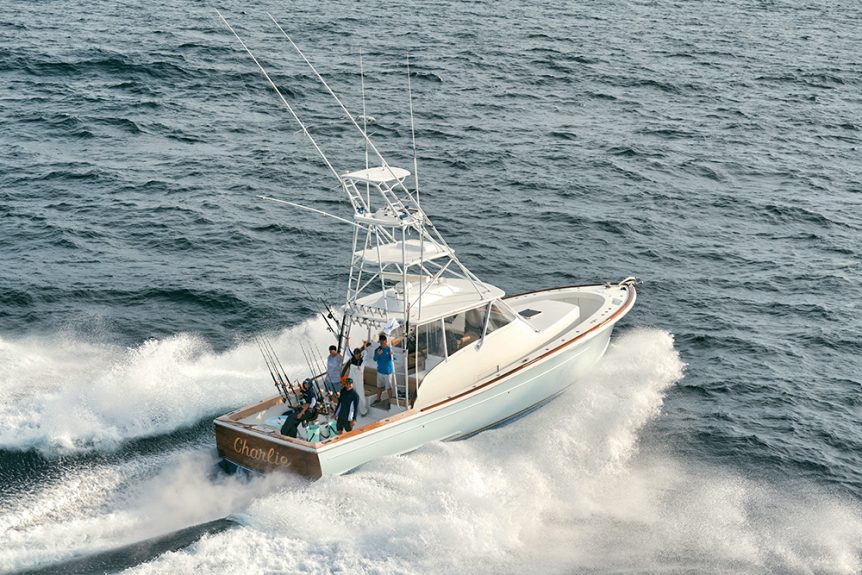 The 59th Annual Buccaneer Cup Sailfish Tournament was held January 19-22, 2022 out of Palm Beach, Fl. A total of 109 sailfish were released, The prize, a purse in excess of $380,000 the prestigious and beautiful Buccaneer Cup trophies, and bragging rights for placing in one of the oldest and most enduring billfish tournaments in the world. Teams fish a format giving them the choice to fish any two out of three possible days. With a cold front pushing through just before the tournament began, teams were hopeful for steady fishing. Although slow conditions put a damper on day one by Saturday, both live and dead bait teams were in neck to neck with Lo Que Sea taking the win with one last release in the final few minutes of the tournament.

We’d like to congratulate angler John Gambino, fishing aboard 46’ Release Boatworks Walkaround CHARLIE, for earning the “Heaviest Fish” trophy with a 54.6 pound yellowfin tuna – a rarity in Palm Beach. Gambino hooked the fish kitefishing with a goggle eye at a depth of 250 feet, and patiently worked it to the boat on the bow on 20 lb test while Tatyana Usova and Lacey Hagler continued to work the kites for sailfish in the cockpit. Peter Schoels ran the boat, while Chris Kennedy and John Bowen gaffed Gambino’s decent-sized yellowfin over the gunnel. Congrats to Team Release Boatworks!

The Buccaneer Cup is produced by The Fisheries Conservation Trust, a 501(c)3 that is governed and managed by the RFA. Proceeds from the Buc Cup Tournament are used to support both the Recreational Fishing Alliance (RFA) and The Billfish Foundation (TBF) in their efforts to ensure the future of this sport and the industry we love.

Courtney Bowden, currently in her ninth year as director of the Buc Cup, was complimented for running one of the best-organized and classiest billfish tournaments in the industry.

A fleet of 39 boats fished two of the three competition days with the majority of the fleet deciding to fish on day three. (Saturday) The tournament radio is hosted by The (beautiful) Jupiter Beach Resort and Spa and Atlantic Marine Electronics. Tournament Director (Bowden) wrote; “This year each day was a wild card. And we never knew who would pull into the lead. Would it be a “live bait day or dead bait” is always the question in this tournament, which makes it all the more exciting. “We had a phenomenal group of competitors this year! And, although fishing was slow you certainly won’t find any other tournament having this much fun on the radio” – it’s an inside joke only for our teams to enjoy! – and it makes our video validation even more fun. – “If you know, you know,” said Bowden.

Awards: (all award details can be found on the Buccaneer Cup App)

The top angler trophies went to Taylor Beckford on the LoQueSea , who also took home 1 st place overall. Top female angler went to: Susan McCart of team Princess Lily. Junior Angler was presented to Dakota Rosher, who is off to a good start following in his families’ footsteps. This was his first tournament win.

Release Boatworks is a proud sponsor of the Buccaneer Cup, and we’d like to thank Courtney Bowden and her team for an impressive tournament and recap details!