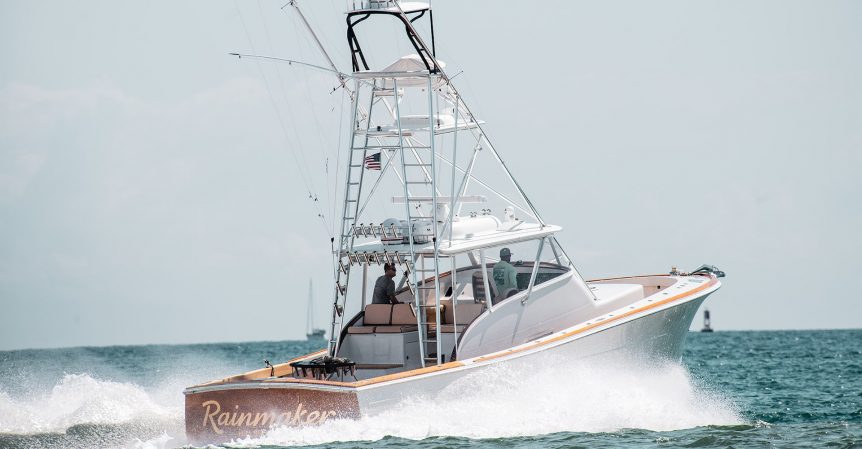 In years past, fishing teams may have sacrificed creature comforts to opt for a center console over a traditional sportfish due to the 360 degrees of fishability and speed, but with advancements in design and materials, walkaround sportfish have become the most in-demand fishing platform on the market.

These days, Release Boatworks is here to make sure you don’t have to compromise. Not only does a walkaround provide hardcore fisherman with 360 degrees of accessibility to the water, but lighter materials and design have provided for optimized fuel economy and speed as well.

The extra protection provided by a sportfish is evident in a walkaround, with choices of a variety of accommodation configurations to include a bridge enclosure with lounge seating, a cabin below with multiple berthing spaces, a couch, a full galley, dining tables, a full head with a proper shower, and even a TV if you please.

While families and fishing teams travelling on center consoles are either sleeping in bean bags or have to book hotel rooms, a family and crew on a walkaround brings their accommodations with them – no need to load suitcases and gear on and off the boat, and no need to even stop if crews desire taking turns sleeping while running through the night.

Not to mention, a beamy Release Boatworks walkaround boasts one thing center consoles definitely don’t – space! Huge cockpits on walkarounds keep anglers from knocking elbows and tripping over each other, and mezzanines designate a space for ride-a-longs to keep out of the way. Livewells, fish boxes, rod storage, tackle drawers, and space for a fighting chair provide a spot for everything, and then some.

Don’t like inboards for whatever reason? Outboards are now available on Release Boatworks walkarounds as well.

Call us today at 833-FISH-RBW to start building yours today!