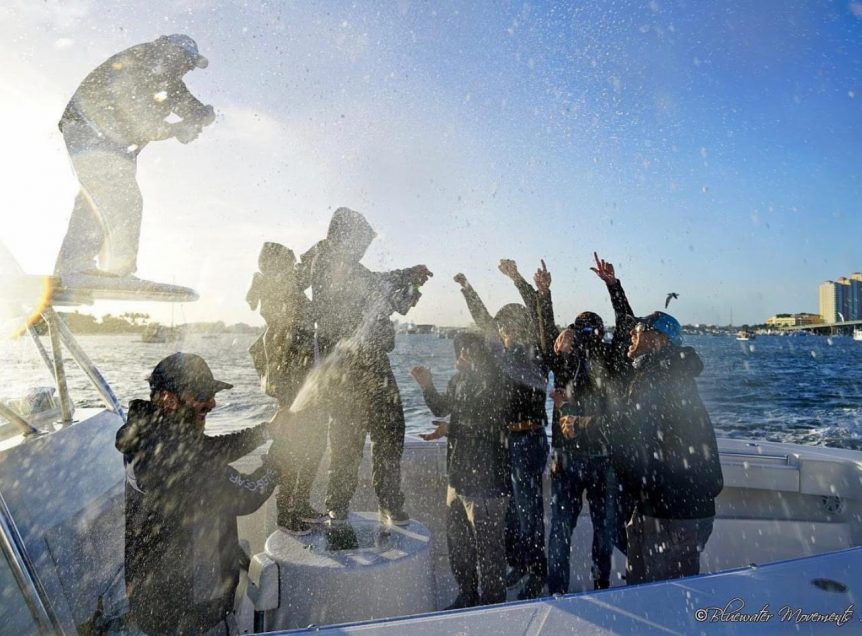 This past weekend, Showtime Fishing Team proved their sailfishing prowess once again by earning first place in Operation Sailfish, leg one of the 2021 Quest for the Crest Sailfish Series in South Florida. Even though a cold snap rolled in forecasting a usual hot sailfish bite this time of year, total releases for the 41-boat two-day tournament only profited 140 sails. Against all odds, Showtime rose to the challenge and won the tournament with 5 releases during day 1 and 3 by the end of day 2, giving them 8 series points and closer to the series championship title than any other team.

Operation Sailfish is the first of a 3-part series, and the first plot on the path to with the coveted “Burgundy Jacket”, which Showtime valiantly won along with an $860,000 purse in 2019 after they dominated the entire series with a total of 80 series points.

The military undertones of Operation Sailfish were created in honor of true American heroes – our United States Military. A signature “Take a Hero Fishing Day” is hosted during the tournament to thank them for their incredible service. Operation Sailfish proudly supports its charitable partner, Operation Homefront, a 501(c)(3) organization whose mission is to build strong, stable and secure military families that can thrive in the communities they’ve worked hard to protect.

The Quest for the Crest is a 3-leg sailfish series with stops in Palm Beach, Ft. Lauderdale and Miami, FL. The allure of a $2 million dollar purse and a hot sailfish bite attracts some of the top teams in the sport to this elite series every year. With prime dates secured in premier destinations during the sailfish season in South Florida, each leg of the series is guaranteed to deliver the ultimate tournament experience for fellow competitors. The crown jewel of billfishing, the burgundy jacket, is presented to just one team at the conclusion of the Quest series each year. Both the jacket and the crest that resides on it, represent the highest achievement in the sport. Privilege is earned in this series where teams go all in to become the #1 sailfishing team in the world.

Showtime Fishing Team’s Capt. Carullo also earned honors as the 2019 Contender Florida Division “Captain of The Year” from InTheBite, and credits that to having a committed group of team players, consisting of angler Joe Fernandez (Owner), Frankie Villasante, Sarah Melia, and Doug Mientkiewicz. Manning the cockpit are Jacek Ozyp, JC Cleare, Kyle Sherman and Jorge Corzo. The team’s tournament line up is rounded out by Jason Spiewak on the camera.

Release Boatworks is honored to be building a 46’ Walkaround for SHOWTIME, and we can’t wait to see them continue to dominate the tournament circuit.

For more information about Quest For The Crest, go here: https://www.bluewatermovements.com/tournaments/sailfish-series/