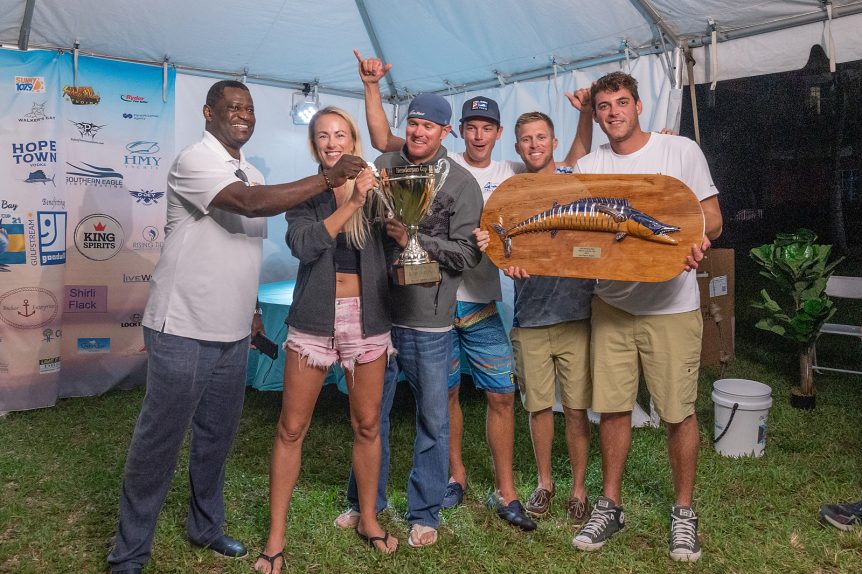 This past week, many of the best wahoo fishing teams in Florida and the Bahamas convened in Old Bahama Bay for one of the most prestigious wahoo fishing tournaments in the world – OBB Wahoo Charity Cup. This not only broke the record in February for being the largest fishing tournament ever held at the West End resort, but it also sold out Old Bahama Bay’s rooms for the first time in ten years. The proceeds from this tournament go to a great organization, Gulfstream Goodwill Industries, who works tirelessly to help end homelessness through on-the-job training and housing programs.

After adhering to Bahamian customs law in which all travelers had to test negative for Covid-19, participants were greeted with Harry’s famous conch salad, fresh banana bread, goombay smashes, and the hospitable smiles of local residents.

BOYLE N POINT ended up winning the First Place trophy along with the “Henderson Cup” with a total 3-fish aggregate of 96.2 pounds, as well as Top Lady Angler by Michelle Boyle with a 43.6 lb wahoo.

FINS earned second place overall with a total aggregate of 92.8 lbs, as well as Biggest Wahoo with a 57.7 lb fish. SIGNED OUT finished third with a total weight of 90.5 lbs. Biggest “Fun Fish” went to SURFBUM with a 20.5 lb dolphin. All winning teams received a trophy by Snidely Wood Studio along with their winnings.

Big thank you to Andy Flack from Canvas Designers for all of your hard work organizing and as MC, Mary Flack from Gulfstream Goodwill for all of your event planning and hard work, all sponsors, and thank you to everyone who attended and donated! 100% of all cash donations, 30% of boat entry fees, and all proceeds from the raffle and silent auction items go straight to Gulfstream Goodwill Industries. Photography was done by YachtPics, and digital marketing was managed by Rising Tide Marketing.