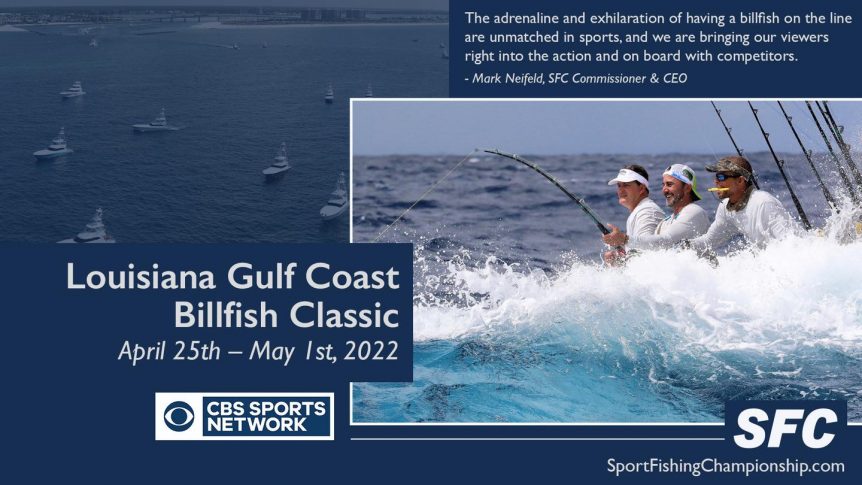 This coming week, we’re proud to sponsor the 2022 Louisiana Gulf Coast Billfish Classic from April 25th to May 1st!

Next week, some of the most elite sportfishing teams in the Gulf will converge at two different marinas – Hurricane Hole in Grand Isle, and Cypress Cove Marina in Venice – to compete in the Louisiana Gulf Coast Billfish Classic. Teams target blue marlin, yellowfin tuna, wahoo, and dolphin to find the heaviest fish for a chance to dominate scales. While in 2021 no blue marlin were weighed, 2020 told a different story with blues weighing in ranging from 470 lbs to “It Just Takes Time” winning first place with a 570.2 pound blue.

“The best fishing in the Gulf is off the coast of Louisiana.” Tournament Director Robbie Carter says, “The Louisiana oil rigs host some of the largest blue marlin and pelagic species that the Gulf has to offer.”

The tournament will be televised on CBS Sports, April 30th, 9-11am CT during the final day of weigh-ins, but will be covered the entire time on Instagram (@LGCBC) and Facebook (Louisiana Gulf Coast Billfish Classic).

This coming week should be an action packed “good ‘ol time” in Louisiana. We look forward to seeing you there!